First of all, be a fearless parent.

In early 2016, Kanhaiya Kumar was the president of the Jawaharlal Nehru University (JNU) Students’ Union when he was charged with sedition on the basis of a video that was later proved to be fake and doctored. Audio and text graphics of slogans like “Pakistan Zindabad” had reportedly been edited on footage of Kanhaiya Kumar and other JNU students at a rally on the campus. After his arrest, he was been beaten up by lawyers inside the Patiala House court complex despite being surrounded by policemen who should have protected him.

“We are of this country and love the soil of India. We fight for those 80% of this country’s people who are poor. For us, this is desh bhakti,” said Kumar.

Raise a child who is articulate and inclusive. Who is not afraid to be a leader. Who includes those people who have been marginalized and forgotten when he talks about freedom, development and progress. Three years later, Kanhaiya Kumar is contesting the Lok Sabha elections as a candidate from Begusarai in Bihar.

Raise a child like Umar Khalid. Khalid, a PhD scholar of JNU was among five other students who had also been charged with sedition. Khalid was consistently singled out of the list of students and targeted by various television news channels. He was accused of being a terrorist sympathizer who had travelled to Pakistan and Kashmir to connect with terrorist organizations. After days in hiding, Khalid returned to the JNU campus and spoke to his fellow students.

“My name is certainly Umar Khalid, but I am not a terrorist.” I did not find it funny when I played the video on my computer the next day, but how can I complain when Khalid was laughing as he opened his speech with this line?

Raise a child who laughs in the face of fear. A child who respects his parents and protects his family even when he disagrees with them.

“It is the easiest to be an anti-national these days,” Khalid said, as he quoted another student, Anirban Bhattacharya. “The minute you start thinking, you would immediately be labelled anti-national.” Khalid referred to Rohith Vemula, the Dalit scholar of the Hyderabad Central University who committed suicide, and said, “…the script is the same, but there will not be any more Rohiths”.

Khalid and Bhattacharya surrendered to the police the next day. “People outside have to carry on the struggle,” said Khalid to his friends as he left. “We will be fighting from inside.” He smiled a wide smile again.

Raise a child who is not afraid of his own voice. Who does not hide to stay safe, especially when his silence can be used to target and hurt others.

Raise a child like Soni Sori. Soni Sori was admitted to the intensive care unit of Indraprastha Apollo hospital in Delhi, with chemical burns on her face a week after the students of JNU were falsely accused of sedition. “If you don’t behave yourself, we will do this to your daughter as well,” threatened her attackers.

Soni Sori was a schoolteacher, an Adivasi woman in Chhattisgarh when she was first arrested for “acting as a conduit for Maoists”. From her prison cell, Soni Sori sent letters to her lawyers, women’s rights organizations and to the Supreme Court, recounting the painful and humiliating sexual torture she had endured. She has named the police officers who raped her and inserted stones in her vagina and rectum. Medical reports confirmed the torture.

Soni Sori received thousands of postcards in jail from people expressing solidarity. “Whenever I am heartbroken I take out each postcard and read it,” she said. “They give me strength and empower me to fight.”

After her release from prison, Sori chose to join the Aam Aadmi Party and contest elections to transform the system. Sori did not win, but she refuses to fade into the background either. She cannot not represent her people and land.

“It is my children who give me the courage to fight,” says Sori, a mother of three. “My fight is not about caste or religion but about the rights of all women.”

Raise a child who cannot be broken by defeat. Soni Sori has become a political activist because she could not bear to remain a victim. The more she is oppressed, the stronger her spirit becomes.

How can one keep hope and inspiration alive when one is feeling fear and despair? How does one raise children to be fearless when we are afraid that it may get them into danger?

We learn from our children, from the youth and from those who rise from the ashes of their oppression. Look into their eyes and recognize the hope, energy and promise in them. See how they act with courage despite threats to their safety.

Give your children the confidence to belong. Allow them to grow up, to know that their opinion matters. We know we belong to a family, institution, community or nation when we are allowed the space to challenge and defy norms. When we can dissent and disobey. When we can change, influence and heal systems.

Raise a child unattached to her social status. Unafraid to lose her privilege. Create a world that has spaces for rebellion. A world that is not threatened by dissent, that nurtures differences.

Only parents who can change this in themselves can raise a child like Kanhaiya Kumar, Umar Khalid, Anirban Bhattacharya and Soni Sori.

(Adapted from an article by the author, published in Mint Lounge on 14.3.2016)
https://www.livemint.com/Leisure/oIQnczMdGTnnNMAbj0vpjN/Raise-a-child-who-gets-into-trouble.html

Natasha Badhwar is a film-maker and the author of the books My Daughters’ Mum and Immortal For A Moment. 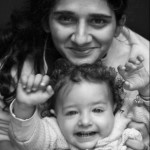